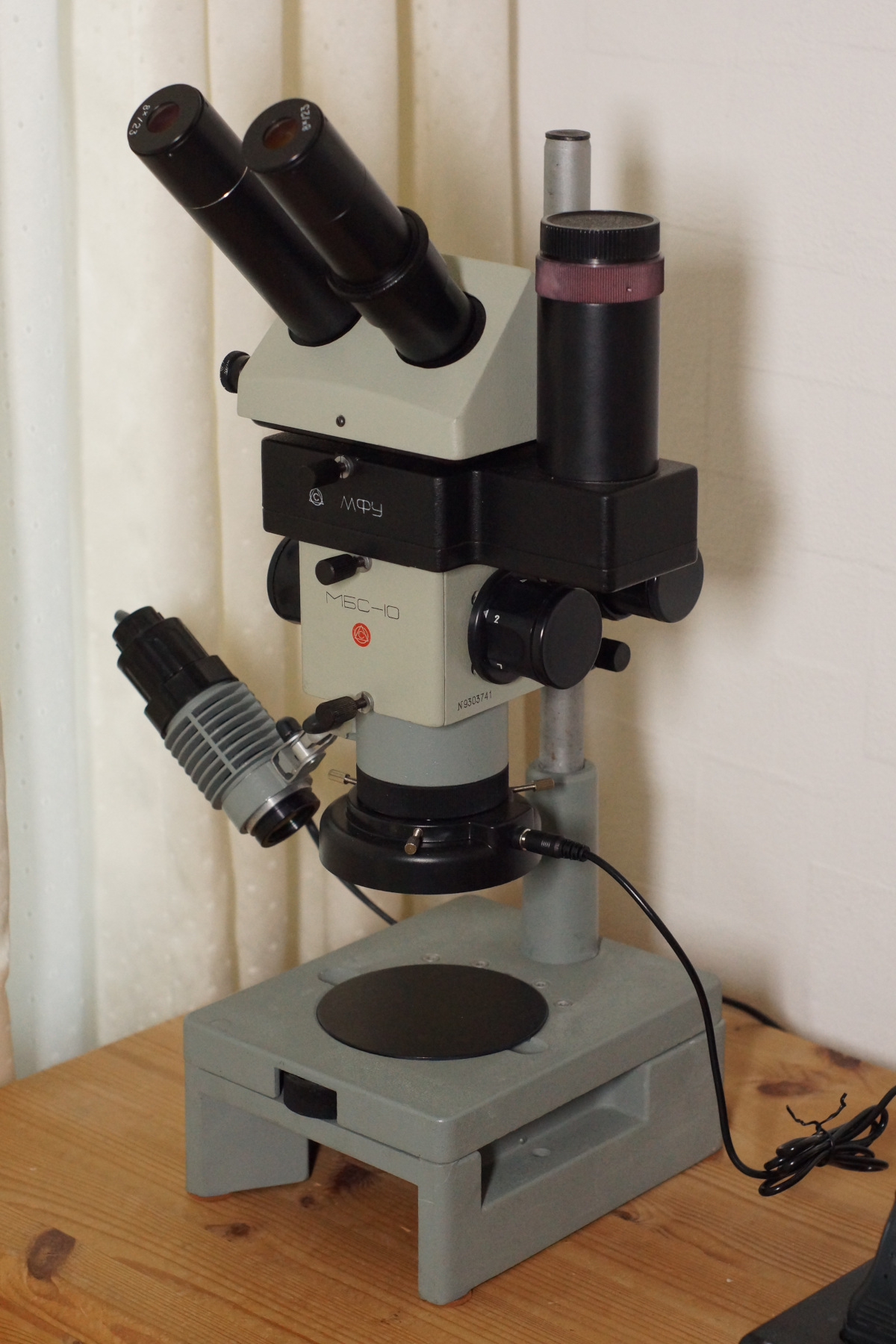 My MBS-10 with MFU phototube and LED ring light

On this I share some information about the popular Russian/Soviet MBS-10 stereomicroscope. I got mine a while back and I’m quite satisfied with it.

I’m going to update this page if I have any new information worth sharing.

If anyone has any additional information worth adding here, drop me a mail.

As far as I could find out there are at least two versions of the MBS-10 with different accessories depending upon the manufacturing date.

This describes the accessories in the polystyrene mould, the other accessories delivered are the same for either versions, though there are some technical differences, i.e. see power supply of the standard illuminator below.

The soviet version can be identified by the state quality mark of the Soviet Union.

The lower objective exists in at least two versions, the default is a f=90mm but there also exists an f=190mm objective.

Furthermore there are adapted version with optical tweaks for specific tasks, such as the ОГМЭ П3 (OGME P3) for microelectronics applications.

Those use the same base body and mechanics but differ (at most) in the choice of some optical lenses.

The following are the optical tables from the manual (translated by me):

The standard illuminator contains a 20W tungsten lamp, an aspheric lens and an optional green filter (usually in the accessory box if not mounted).

It takes a B15d 8V 20W tungsten filament light bulb. These are the same as with LOMO microscopes and illuminators.

On mine the aspheric lens was cracked, fortunately I found generic ones out of glass with a matching diameter (26.5mm, ~2mm thickness at the outer edge) on eBay and replaced them.

The standard power supply consists of a transformer followed by a 7.5Ω power potentiometer (~30W) to adjust the current (and thus dim the light bulb). There are two versions of this power supply, the old one uses a non-earthed europlug connector, newer ones an earthed Schutzkontaktstecker. I also appears that the newer versions come with fuses, which the older versions do not. On the old versions the protective earth to the enclosure can be connected using a 4mm banana plug.

In any case for the old version it is recommended to switch the unearthed connector with an earthed one, as the enclosure of the power supply is out of cast metal and let’s be real nobody connects the 4mm banana plug for the PE. Furthermore while making this modification it may be worth to add fuses too. I’d recommend the following (at your own risk however):

To get more clean white light which is essential for when using the МФУ adapter to take pictures, any LED ring light with an interior diameter of >60mm can be used. There are ones specific for stereomicroscopes available on the web, however it is worthy of note that many of those come with power supplies and dimmers that don’t necessarily meet electrical safety and compliance standards.

Usually the adapter consists of:

In my case I didn’t get the optional extension tube. But that’s not a big deal, since I use this with my DSLR cameras which I mount with the M42 thread anyway.

It is worth getting a M42 dust cap right away to close the tube when it is not needed.

The MFU has two prisms that engage when the “ФОТО” lever on the side is in the back position, only the right side is then passed through a lens and a mirror towards the camera. The left side prism only has the purpose to ensure that the optical attenuation is consistent between the two eyepieces when the photo mode is enabled.

My Experience with the МФУ (MFU)

The tube works quite well on the x0,6 magnification there is vignetting, but otherwise this is not noticeable. On the highest x7 magnification the microscope is noticeably at the limit of it’s optical capabilities, especially when you use a 24MP DSLR you can see blurring and small chromatic abberations when viewing the resulting image 1:1.

One potential problem is that on modern DSLR cameras the CMOS sensor is quite far back into the camera body, whereas the tube was designed for analog 35mm cameras where the film would be fairly close to the opening. This has the effect that there is always some re-focusing required between the eyepieces and the camera, as they can’t achieve focus at the same time. With modern mirrorless DSLRs this might no longer be a problem, unfortunately I don’t have one of those to test.

A definite must is to manually tweak the white balance, otherwise you may get a slightly green or yellow tint in your images. 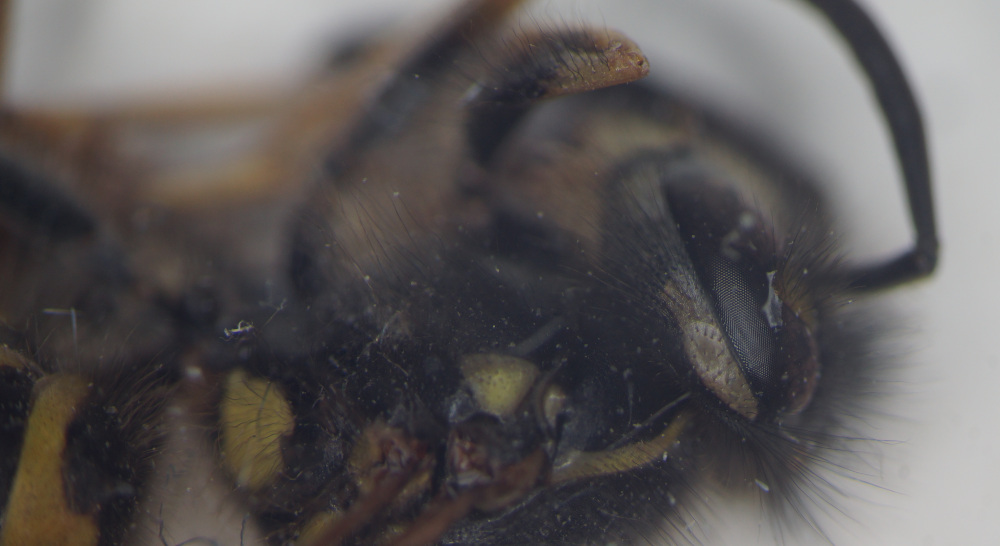